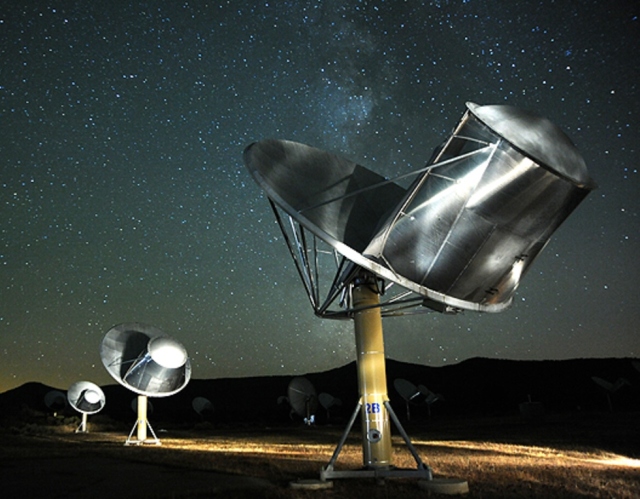 The antennas of the Allen Telescope Array in California is collecting signals from a strange star known as KIC 8462852. (Credit: SETI Institute)

One of the premier telescope arrays in the search for extraterrestrial intelligence, or SETI, is focusing its antennas on an anomalously blinking star, thanks in part to speculation that the star called KIC 8462852 could harbor a network of alien megastructures.

The Allen Telescope Array, a complex of 42 radio dishes in Northern California that was funded in part by Seattle billionaire Paul Allen, has been collecting data about the star since Thursday evening, SETI Institute researcher Doug Vakoch said.

Aerospace and science editor for GeekWire, creator of Cosmic Log, author of "The Case for Pluto: How a Little Planet Made a Big Difference," president of the Council for the Advancement of Science Writing. Check out "About Alan Boyle" for more fun facts.
View all posts by Alan Boyle →
This entry was posted in GeekWire and tagged Allen Telescope Array, Astrobiology, Astronomy, Kepler, SETI, Space. Bookmark the permalink.

1 Response to Is it aliens? SETI telescope targets mystery star