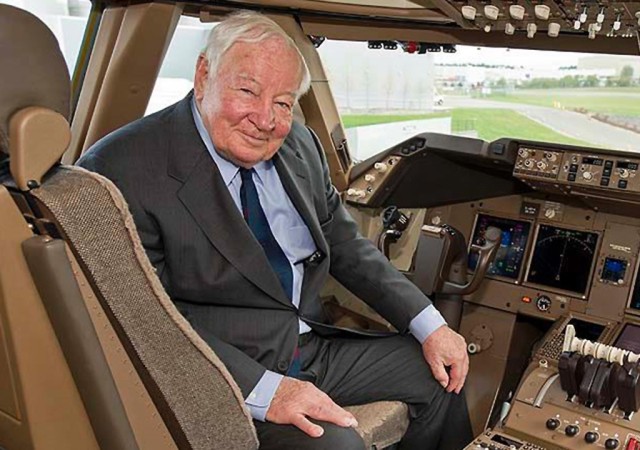 Boeing engineer Joe Sutter, the “Father of the 747,” takes a turn in the pilot’s seat. (Credit: Boeing file)

Boeing engineer Joe Sutter, who led the engineering team for the 747 jet in the mid-1960s and played a role in the investigation of the Challenger shuttle disaster in 1986, died this morning at the age of 95.

His passing was announced online by Ray Conner, president and chief executive officer of Boeing Commercial Airplanes. The cause of death was not mentioned.

Sutter’s role in creating Boeing’s biggest passenger jet earned him the title of “Father of the 747.” His 4,500-member team came to be known as “the Incredibles” for putting the plane into production 29 months after it was conceived.

“It remains a staggering achievement and a testament to Joe’s ‘incredible’ determination,” Conner wrote.

Aerospace and science editor for GeekWire, creator of Cosmic Log, author of "The Case for Pluto: How a Little Planet Made a Big Difference," president of the Council for the Advancement of Science Writing. Check out "About Alan Boyle" for more fun facts.
View all posts by Alan Boyle →
This entry was posted in GeekWire and tagged 747, Aviation, Boeing, Technology. Bookmark the permalink.