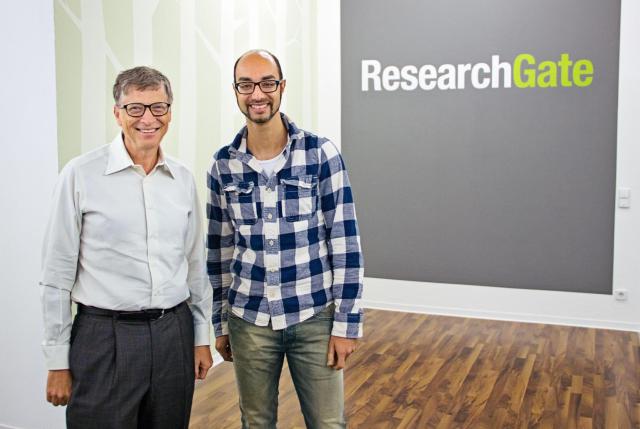 Microsoft co-founder Bill Gates, at left, is among the investors supporting ResearchGate and its CEO, Ijad Madisch. (ResearchGate Photo)

Berlin-based ResearchGate, a LinkedIn-type site for scientists, today revealed that it has received $52.6 million from Microsoft co-founder Bill Gates and a wide spectrum of other investors in a funding round.

The investment round closed in 2015, but it’s just now being reported due to German regulatory requirements.

New investors for this round included the Wellcome Trust, Goldman Sachs Investment Partners and Four Rivers Group, with participation from the likes of Hollywood actor Ashton Kutcher and French entrepreneur Xavier Niel.

Gates re-upped after investing in a previous $35 million round for ResearchGate. Benchmark, Founders Fund and Tenaya Capital are among the other investors who added to their previous stake.

Aerospace and science editor for GeekWire, creator of Cosmic Log, author of "The Case for Pluto: How a Little Planet Made a Big Difference," president of the Council for the Advancement of Science Writing. Check out "About Alan Boyle" for more fun facts.
View all posts by Alan Boyle →
This entry was posted in GeekWire and tagged Bill Gates, ResearchGate, Science. Bookmark the permalink.