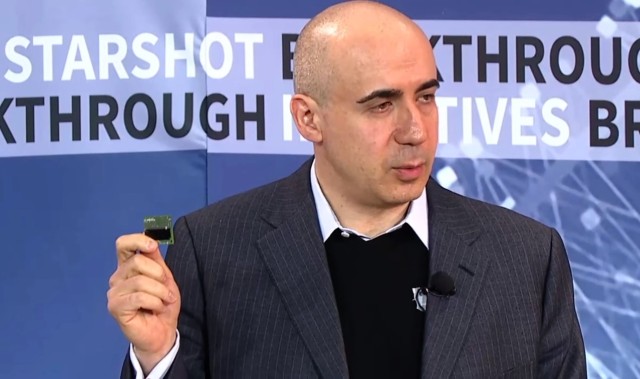 Russian billionaire Yuri Milner holds a “Sprite” mini-probe like the ones that are being tested in low Earth orbit. (Breakthrough Starshot via YouTube / SciNews)

Breakthrough Starshot says it’s been testing prototype interstellar spacecraft no bigger than postage stamps in orbit for the past month, and they seem to be working just fine.

Six of the 1.4-inch-square circuit boards, dubbed “Sprites,” were launched into low Earth orbit on June 23 as tiny piggyback payloads on two nanosatellites. Those educational satellites, Max Valier Sat and Venta 1, were developed with the aid of German-based OHB System and launched by an Indian PSLV rocket. (Seattle-based Spaceflight played a role in launch logistics.)

In a statement issued today, Breakthrough Starshot said the Sprites are still attached to the nanosatellites and are “performing as designed.” The Sprite radio communication system is in contact with ground stations in California and New York, as well as with amateur radio enthusiasts around the world.

Aerospace and science editor for GeekWire, creator of Cosmic Log, author of "The Case for Pluto: How a Little Planet Made a Big Difference," president of the Council for the Advancement of Science Writing. Check out "About Alan Boyle" for more fun facts.
View all posts by Alan Boyle →
This entry was posted in GeekWire and tagged Alpha Centauri, Interstellar Flight, Proxima Centauri, Space, Starshot. Bookmark the permalink.