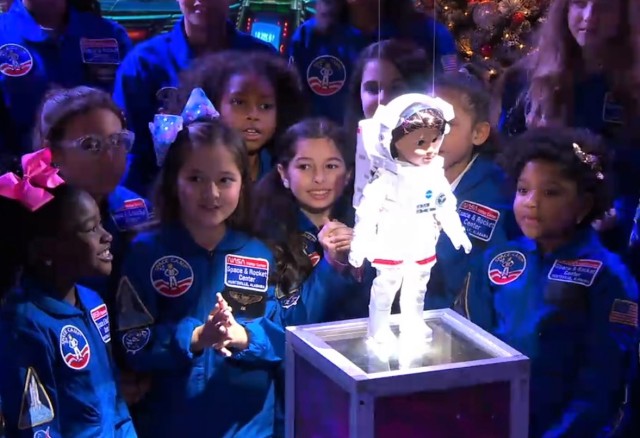 A doll named Luciana Vega is unveiled as the American Girl of the Year for 2018 on ABC’s “Good Morning America” as Space Camp girls look on. (ABC / GMA)

American Girl put a Space Age spin on the centuries-old tradition of dress-up dolls today by unveiling a spacesuit-clad character named Luciana Vega as its “Girl of the Year” for 2018.

The big reveal came on ABC’s “Good Morning America,” when the 18-inch-high doll was lowered to the set amid a throng of girls wearing Space Camp uniforms. Each of them got a doll.

American Girl, which has been putting out dolls and accessories with elaborate stories behind them since 1986, says Vega’s character is an 11-year-old “aspiring astronaut who dreams of being the first person to go to Mars.”

Aerospace and science editor for GeekWire, creator of Cosmic Log, author of "The Case for Pluto: How a Little Planet Made a Big Difference," president of the Council for the Advancement of Science Writing. Check out "About Alan Boyle" for more fun facts.
View all posts by Alan Boyle →
This entry was posted in GeekWire and tagged American Girl, Education, Space, Toys. Bookmark the permalink.