How scientists are expanding the SETI spectrum 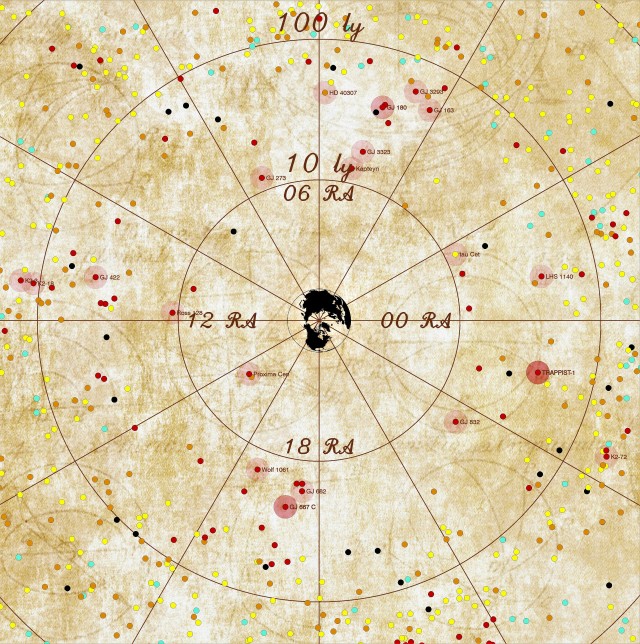 This map from the University of Puerto Rico’s Planetary Habitability Laboratory shows the known planetary systems within about 100 light-years from Earth, plotted on a logarithmic scale. The systems with potentially habitable exoplanets are highlighted with red circles. (PHL @ UPR Arecibo)

BERKELEY, Calif. — Twenty years after the movie “Contact” brought the search for extraterrestrial intelligence, or SETI, to the big screen, it’s dawning on astronomers that the real-world plotline might turn out to be totally different 20 years from now.

So far, SETI has been dominated by radio telescope surveys looking for anomalous patterns that may point to alien transmissions. But SETI’s practitioners are realizing that E.T. may make its presence known in other ways.

Over the next 20 years, or 200 years, SETI may come to stand for sensing extraterrestrial irregularities, ranging from unusual atmospheric chemistry to higher-than-expected thermal emissions. The telltale signs of life beyond our solar system may even be associated with phenomena we haven’t yet come across.

Aerospace and science editor for GeekWire, creator of Cosmic Log, author of "The Case for Pluto: How a Little Planet Made a Big Difference," president of the Council for the Advancement of Science Writing. Check out "About Alan Boyle" for more fun facts.
View all posts by Alan Boyle →
This entry was posted in GeekWire and tagged Astrobiology, Exoplanets, SETI, Space. Bookmark the permalink.