What happens to Higgs bosons? Here’s a clue 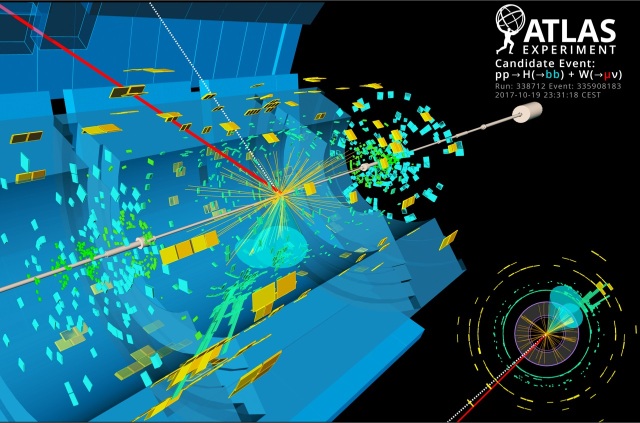 A diagram shows a proton-proton collision in the Large Hadron Collider’s ATLAS detector that produced a Higgs boson, which quickly decayed into two bottom quarks (bb, shown as blue cones). The collision also produced a W boson that decayed into a muon (μ) and a neutrino (ν). (ATLAS / CERN Graphic)

It’s been six years since physicists at Europe’s Large Hadron Collider announced the discovery of the Higgs boson, but they’re just now confirming what most of the mysterious subatomic particles do when they decay.

That’s not exactly a surprise: The mainstream theory of particle physics, known as the Standard Model, suggests that’s the most common course followed by the Higgs, which exists in the particle collider for only an instant before breaking down. About 60 percent of the Higgs bosons created in high-energy are thought to turn into a pair of bottom quarks, which is No. 2 on the mass scale for six “flavors” of quarks.

It took several years for researchers to nail down the evidence to a standard significance of 5-sigma — the same standard that applied to the Higgs boson’s discovery in 2012.

Aerospace and science editor for GeekWire, creator of Cosmic Log, author of "The Case for Pluto: How a Little Planet Made a Big Difference," president of the Council for the Advancement of Science Writing. Check out "About Alan Boyle" for more fun facts.
View all posts by Alan Boyle →
This entry was posted in GeekWire and tagged Higgs boson, Particle Physics, Physics, Quarks, Science. Bookmark the permalink.