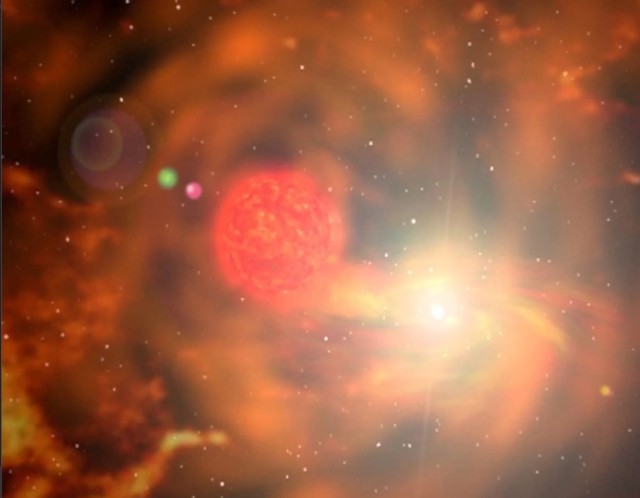 In what sounds like a cosmic episode of “CSI,” sleuthing astronomers have figured out what touched off a stellar explosion 545 million light-years away, based on evidence left behind at the scene of the crime.

An international team of astronomers used the Hubble Space Telescope and other observatories to sift through the chemical fingerprints left behind in the remnants of a Type Ia supernova known as SN 2015cp. The astronomers knew the type of star that blew up: It was a carbon-oxygen white dwarf. But they wanted to find out whether a different kind of star had a hand in the blast.

Today the astronomers reported the detection of hydrogen-rich debris in the vicinity of the supernova site — which cracks the case wide open.

Aerospace and science editor for GeekWire, creator of Cosmic Log, author of "The Case for Pluto: How a Little Planet Made a Big Difference," president of the Council for the Advancement of Science Writing. Check out "About Alan Boyle" for more fun facts.
View all posts by Alan Boyle →
This entry was posted in GeekWire and tagged AAS, Astronomy, Space, Supernova, University of Washington. Bookmark the permalink.