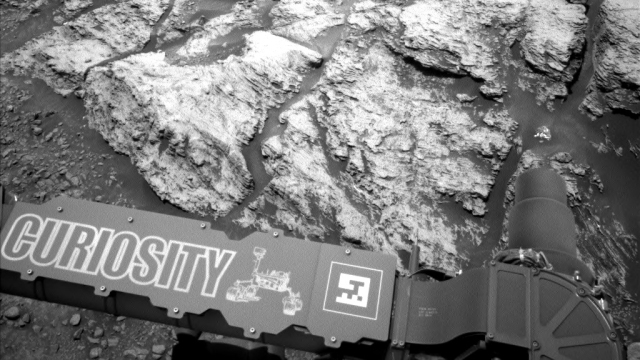 This image was taken by NASA’s Curiosity rover on June 18. It shows part of Teal Ridge, which the rover has been studying in a region called the “clay-bearing unit.” (NASA / JPL-Caltech Photo)

BELLEVUE, Wash. — NASA says the record-setting belch of Martian methane that its Curiosity rover detected last week has faded away, leaving some big questions hanging in the air: Where did the gas come from, and what were its origins?

Much of the methane on Earth is produced biologically, from sources ranging from microbes to the digestive tracts of cows and humans. But methane can also be produced through geological, completely non-biological processes. For example, methane makes up about 5 percent of the atmosphere of the Saturnian moon Titan, which is so cold that methane and other hydrocarbons pool up in lakes and rivers.

Curiosity’s onboard chemistry lab — known as Sample Analysis at Mars, or SAM — has an instrument that can sense methane levels in the Red Planet’s atmosphere, and those levels usually amount to less than 1 part per billion by volume. But SAM has registered several curious methane spikes during its seven years of surface operations — including a rise to 6 parts per billion in 2013 that got NASA’s attention, and another detection that rose even higher during the following Martian year.

Last week, methane levels spiked to the highest levels ever detected by Curiosity: 21 parts per billion. That caused the SAM science team to change their plans for the weekend and make follow-up measurements.

Those measurements were sent back to the science team this morning, and they showed that methane levels were back to their usual level.

Aerospace and science editor for GeekWire, creator of Cosmic Log, author of "The Case for Pluto: How a Little Planet Made a Big Difference," president of the Council for the Advancement of Science Writing. Check out "About Alan Boyle" for more fun facts.
View all posts by Alan Boyle →
This entry was posted in GeekWire and tagged Astrobiology, Curiosity, Mars, NASA, Space. Bookmark the permalink.