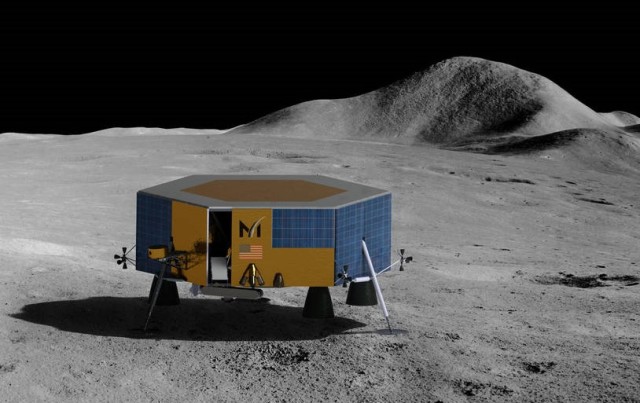 NASA has selected California-based Masten Space Systems to deliver eight science payloads to the moon’s south pole in 2022 on its XL-1 lunar lander.

Seattle-based Olis Robotics has a role in getting one of those payloads, a robotic arm, ready to fly.

The $75.9 million contract was awarded to Masten under the terms of NASA’s Commercial Lunar Payload Services initiative, or CLPS — which provides opportunities for the space agency to order lunar delivery services from commercial providers, in a way that’s similar to ordering a rideshare trip on earthly streets. In 2018, Masten was one of the first delivery providers that NASA put on its CLPS list.

Masten hasn’t yet flown anything in space, but it’s been working on its lander technology for more than a decade in partnership with NASA’s Jet Propulsion Laboratory, the Pentagon’s Defense Advanced Research Projects Agency and the Air Force Research Laboratory, among others. Back in 2009, Masten won more than a million dollars in the NASA-funded Lunar Lander Challenge.

Aerospace and science editor for GeekWire, creator of Cosmic Log, author of "The Case for Pluto: How a Little Planet Made a Big Difference," president of the Council for the Advancement of Science Writing. Check out "About Alan Boyle" for more fun facts.
View all posts by Alan Boyle →
This entry was posted in GeekWire and tagged Masten Space Systems, Moon, NASA, Olis Robotics, Space. Bookmark the permalink.