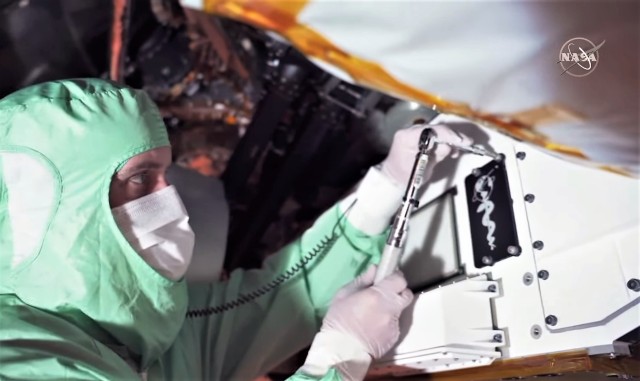 An engineer attaches a plaque paying tribute to medical workers on the chassis of NASA’s Perseverance rover, which is due for launch to Mars as early as next month. (NASA via YouTube)

When NASA’s Perseverance rover lands in Mars’ Jezero Crater next February, it’ll be carrying a tribute to the medical community and their work to quell the coronavirus pandemic.

A 3-by-5-inch aluminum plaque, showing planet Earth being supported by the ancient staff-and-serpent symbol of the medical profession, will grace the left side of the rover chassis.

Matt Wallace, the mission’s deputy project manager at NASA’s Jet Propulsion Laboratory, said the plaque recognizes the sacrifices that have been made by medical workers — and also by members of the mission team, who had to go to extraordinary lengths to keep the $2.4 billion project on track for launch as early as July 20.

Aerospace and science editor for GeekWire, creator of Cosmic Log, author of "The Case for Pluto: How a Little Planet Made a Big Difference," president of the Council for the Advancement of Science Writing. Check out "About Alan Boyle" for more fun facts.
View all posts by Alan Boyle →
This entry was posted in GeekWire and tagged 2020 rover, Coronavirus, Mars, NASA, Perseverance rover, Space. Bookmark the permalink.