Why some (but not all) polls were wrong 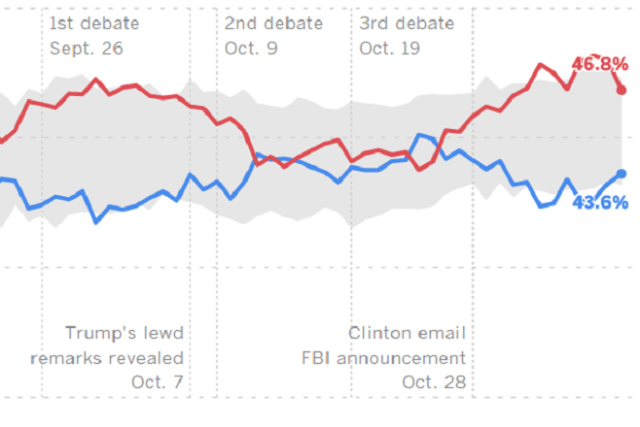 The USC Dornsife / Los Angeles Times “Daybreak” poll tracked Donald Trump’s ratings (in red) and Hillary Clinton’s ratings (in blue) using a protocol that took the depth of respondents’ support for candidates into account. This shows how the number changed over the final weeks of the campaign. (Credit: L.A. Times)

It may look as if pollsters got the presidential election horribly wrong, considering that Hillary Clinton had been favored over Donald Trump, who ended up winning. But they weren’t as wrong as it looks.

For one thing, Clinton seems assured of winning more of the total popular vote once all the returns are in. It’s a quirk of America’s electoral system that votes are awarded on a state-by-state basis. The founding fathers set up the Electoral College that way by design, to balance the power given to big states (like New York) against smaller states (like Wyoming). That played to Trump’s strength in rural areas.

Because of the Electoral College system, pollsters will have to de-emphasize popular-vote predictions in the future, according to David Rothschild, the economist at Microsoft Research who runs a political prediction market called PredictWise.

Aerospace and science editor for GeekWire, creator of Cosmic Log, author of "The Case for Pluto: How a Little Planet Made a Big Difference," president of the Council for the Advancement of Science Writing. Check out "About Alan Boyle" for more fun facts.
View all posts by Alan Boyle →
This entry was posted in GeekWire and tagged Politics, Prediction Markets, Science. Bookmark the permalink.