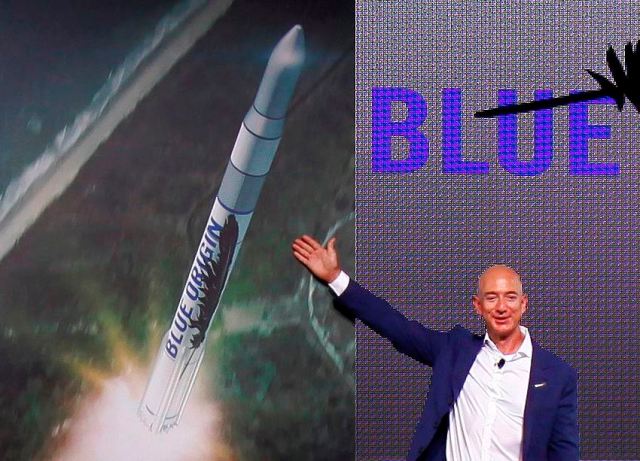 Jeff Bezos shows off the concept for Blue Origin’s launch system during a 2015 news conference in Florida. The rocket could reportedly be adapted for moon missions. (Blue Origin photo)

Amazon billionaire Jeff Bezos’ Blue Origin space venture has reportedly proposed sending a robotic lander to the moon’s south polar region by 2020, as an initial step toward an “Amazon-like” lunar delivery system and eventually a permanently inhabited moon base.

Blue Origin’s white paper is described in a report from The Washington Post, which is owned by Bezos.

The Post says the company’s seven-page proposal, dated Jan. 4, has been circulating among NASA’s leadership and President Donald Trump’s transition team. It’s only one of several proposals aimed at turning the focus of exploration beyond Earth orbit to the moon and its environs during Trump’s term.

Aerospace and science editor for GeekWire, creator of Cosmic Log, author of "The Case for Pluto: How a Little Planet Made a Big Difference," president of the Council for the Advancement of Science Writing. Check out "About Alan Boyle" for more fun facts.
View all posts by Alan Boyle →
This entry was posted in GeekWire and tagged Blue Origin, Jeff Bezos, Moon, NASA, New Glenn, Space. Bookmark the permalink.