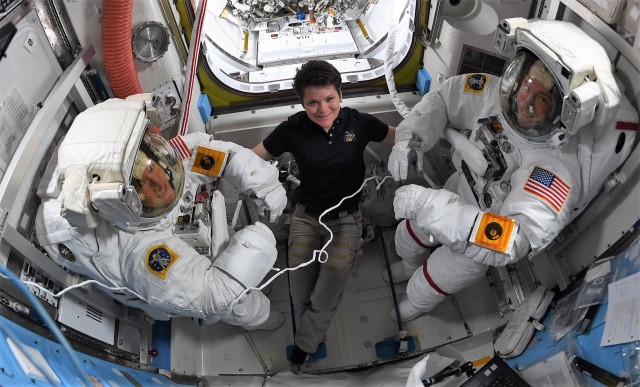 Today’s spacewalk at the International Space Station wasn’t as historic as it was originally meant to be, but it got the job done nevertheless.

The six-hour, 45-minute outing followed up on a spacewalk that Hague and NASA crewmate Anne McClain conducted last week to swap out a similar set of batteries. It turns out that one of those newly installed batteries hasn’t been charging properly. To remedy the situation, Hague and Koch did some set-up work that will make it possible for two of the nickel-hydrogen batteries to take its place. That part of the job will be completed using the station’s robotic arm.

Originally, NASA planned to have Koch and McClain take on today’s extravehicular tasks. That would have made it the first all-female spacewalk in history. Women have gone on spacewalks many times before, dating back to 1984, but always in the company of men.

Aerospace and science editor for GeekWire, creator of Cosmic Log, author of "The Case for Pluto: How a Little Planet Made a Big Difference," president of the Council for the Advancement of Science Writing. Check out "About Alan Boyle" for more fun facts.
View all posts by Alan Boyle →
This entry was posted in GeekWire and tagged International Space Station, NASA, Space, Spacewalk. Bookmark the permalink.