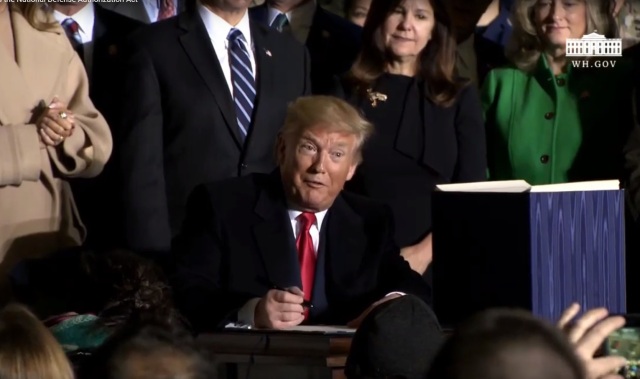 Amid military fanfare, President Donald Trump signed a defense authorization bill into law to create the U.S. Space Force as a sixth branch of the armed forces.

“This is a very big and important moment,” Trump told hundreds of military personnel and VIPs who gathered at Joint Base Andrews in Maryland for today’s signing ceremony.

The Space Force is intended to bring together military resources focusing on the high frontier, including potential threats from GPS jammers, anti-satellite weapons, space-based weapons and hypersonic attack vehicles.

Trump said the creation of the Space Force recognizes that the final frontier has evolved into a distinct warfighting domain.

“American superiority in space is absolutely vital,” he said. “We’re leading, but we’re not leading by enough. But very shortly, we’ll be leading by a lot.”

Aerospace and science editor for GeekWire, creator of Cosmic Log, author of "The Case for Pluto: How a Little Planet Made a Big Difference," president of the Council for the Advancement of Science Writing. Check out "About Alan Boyle" for more fun facts.
View all posts by Alan Boyle →
This entry was posted in GeekWire and tagged Donald Trump, Military, Politics, Space, Space Force. Bookmark the permalink.