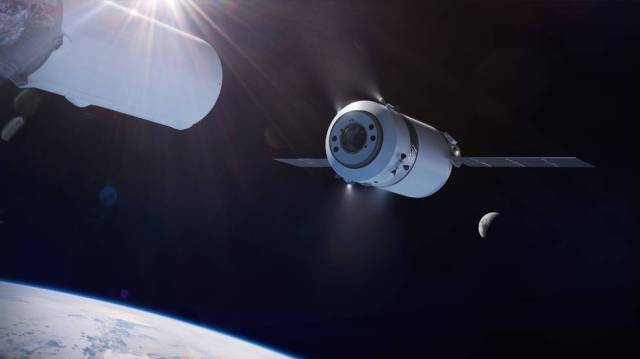 An artist’s conception shows SpaceX’s Dragon XL cargo ship as it is deployed from the Falcon Heavy’s second stage in high Earth orbit, on its way to the Gateway in lunar orbit. (SpaceX Illustration)

SpaceX’s robotic Dragon XL, a cylindrical, supersized version of its workhorse Dragon spacecraft, will handle shipments to the Gateway space platform as the first commercial provider to receive a Gateway Logistics Services contract from NASA.

Aerospace and science editor for GeekWire, creator of Cosmic Log, author of "The Case for Pluto: How a Little Planet Made a Big Difference," president of the Council for the Advancement of Science Writing. Check out "About Alan Boyle" for more fun facts.
View all posts by Alan Boyle →
This entry was posted in GeekWire and tagged Artemis, Deep Space Gateway, Dragon, Moon, NASA, Space, SpaceX. Bookmark the permalink.