NOAA and Vulcan team up for ocean science 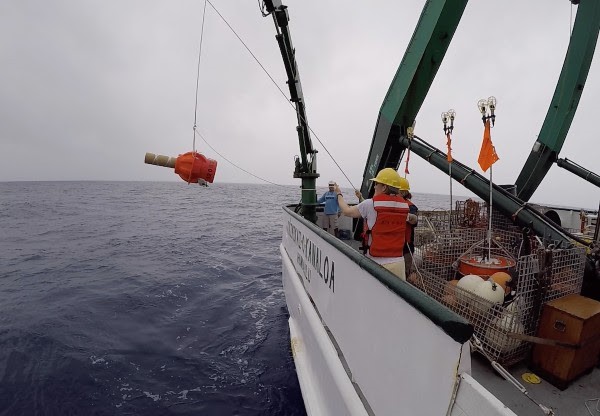 Elizabeth Steffen, a scientist at NOAA’s Pacific Marine Environmental Lab and the University of Hawaii, deploys a Deep Argo float off Hawaii in 2018. The float was tested in preparation for its use in a data-tracking array in the western South Atlantic. NOAA and Vulcan Inc. have been collaborating in the project. (University of Hawaii Photo / Blake Watkins)

The National Oceanic and Atmospheric Administration says it has forged a new agreement with Vulcan Inc., the Seattle-based holding company created by the late Microsoft co-founder Paul Allen, to share data on ocean science and exploration.

The memorandum of understanding builds on an existing relationship between NOAA and Vulcan.

“The future of ocean science and exploration is partnerships,” retired Navy Rear Admiral Tim Gallaudet, assistant secretary of commerce for oceans and atmosphere and deputy NOAA administrator, said today in a news release. “NOAA is forging new collaborations, such as the one with Vulcan, to accelerate our mission to map, explore and characterize the ocean, which will help NOAA support the conservation, management and balanced use of America’s ocean and understand its key role in regulating our weather and climate.”

Vulcan CEO Bill Hilf said the agreement furthers his company’s mission, which includes developing new technologies for conservation and addressing environmental challenges relating to the world’s oceans. Vulcan’s projects include the Allen Coral Atlas, which uses satellite imagery and other data sets to monitor the health of coral reefs; and Skylight, which provides real-time intelligence about suspicious maritime activity.

Aerospace and science editor for GeekWire, creator of Cosmic Log, author of "The Case for Pluto: How a Little Planet Made a Big Difference," president of the Council for the Advancement of Science Writing. Check out "About Alan Boyle" for more fun facts.
View all posts by Alan Boyle →
This entry was posted in GeekWire and tagged Environment, Marine Science, NOAA, Oceans, Science, Vulcan. Bookmark the permalink.