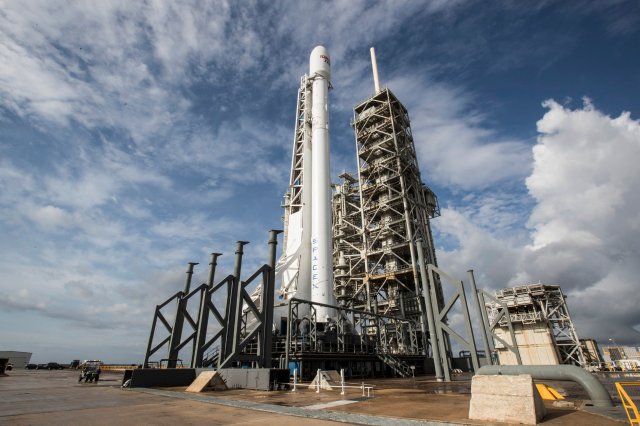 SpaceX’s Falcon 9 rocket stands on its pad at Kennedy Space Center’s Launch Complex 39A in preparation for sending the EchoStar 23 satellite into orbit. (SpaceX Photo)

High winds have forced SpaceX to postpone its launch of the EchoStar 23 communications satellite, a mission requiring so much oomph that the company won’t even try landing the first-stage booster afterward.

The Falcon 9 rocket was due to lift off in the wee hours of March 15 from Launch Complex 39A at NASA’s Kennedy Space Center in Florida, but SpaceX decided to wait out the winds.

Aerospace and science editor for GeekWire, creator of Cosmic Log, author of "The Case for Pluto: How a Little Planet Made a Big Difference," president of the Council for the Advancement of Science Writing. Check out "About Alan Boyle" for more fun facts.
View all posts by Alan Boyle →
This entry was posted in GeekWire and tagged Commercial Spaceflight, Falcon 9, Satellites, SpaceX. Bookmark the permalink.