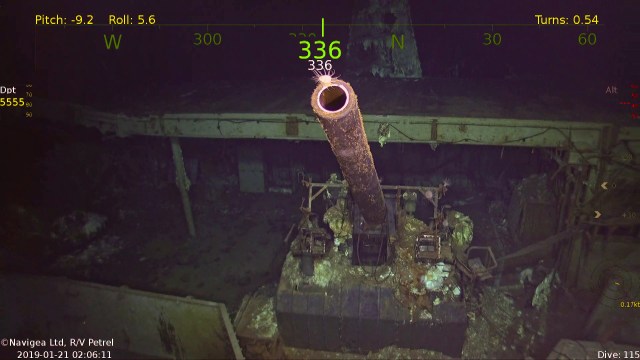 This 5-inch gun is part of the wreckage from the USS Hornet. (Photo courtesy of Paul G. Allen’s Vulcan Inc.)

Chalk up another historic shipwreck discovery for the Petrel, the research vessel funded by the late Seattle billionaire Paul Allen: This time it’s the USS Hornet, the World War II aircraft carrier that was sunk by Japanese forces in 1942.

The Hornet is best-known as the launching point for the Doolittle Raid, the first airborne attack on the Japanese home islands after Pearl Harbor and the United States’ entry into the war. Led by U.S. Army Lt. Col. Jimmy Doolittle, the raid in April 1942 provided a boost to American morale and put Japan on alert about our covert air capabilities.

Aerospace and science editor for GeekWire, creator of Cosmic Log, author of "The Case for Pluto: How a Little Planet Made a Big Difference," president of the Council for the Advancement of Science Writing. Check out "About Alan Boyle" for more fun facts.
View all posts by Alan Boyle →
This entry was posted in GeekWire and tagged History, Military, Oceans, Paul Allen, Science, USS Hornet, Vulcan. Bookmark the permalink.