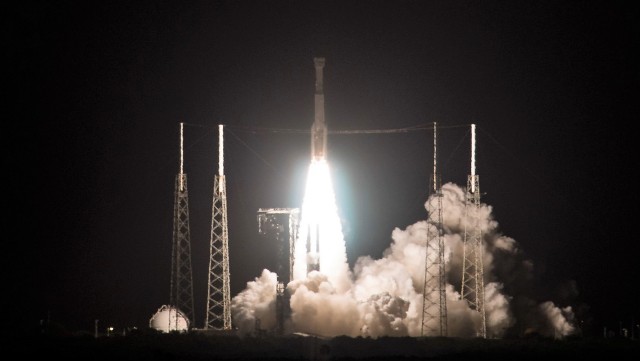 Boeing’s Starliner space taxi blasted off for the first time today on an uncrewed mission to the International Space Station, but ran into a problem that precluded a space station rendezvous.

The anomaly is sure to complicate preparations for the crewed Starliner mission that’s supposed to follow up on the uncrewed test flight. But NASA Administrator Jim Bridenstine wouldn’t rule out the possibility that the crewed mission could go ahead as planned without first having to do another uncrewed test.

“I think it’s too early for us to make that assessment,” Bridenstine said at a post-launch news conference.

Aerospace and science editor for GeekWire, creator of Cosmic Log, author of "The Case for Pluto: How a Little Planet Made a Big Difference," president of the Council for the Advancement of Science Writing. Check out "About Alan Boyle" for more fun facts.
View all posts by Alan Boyle →
This entry was posted in GeekWire and tagged Boeing, Commercial Spaceflight, International Space Station, NASA, Space, Starliner, United Launch Alliance. Bookmark the permalink.